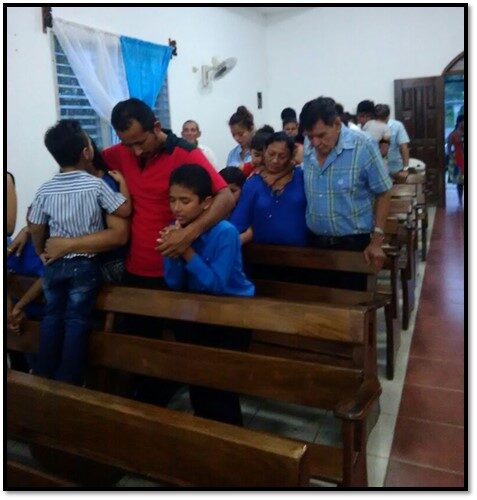 Unlike American holiday dates, March 18 was Father’s Day in Honduras. The people here love to celebrate Mother’s and Father’s Days and make it a big fiesta.

There is no exception in our church, Templo Evangelico Emanuel.  Pastor Nelson Batista centered his sermon on the Fathers and we had a big luncheon in the Production Center after the service.

What struck Gary and I was one particular story concerning Nelson Osorto’s father.  Nelson was baptized several years ago when he gave his heart and soul to the Lord.  Nelson is our computer/Bible/English teacher and interim pastor in Nelson Batista’s absence.  Like so many scenarios in Honduras, Nelson’s father abandoned him and his mother when Nelson was young. Nelson’s mother worked several jobs in order to make a living and pay for his education.

Nelson was able to get a job on a cruise ship and earned enough money to build his mother and family a house.  Nelson would hand carry the cement blocks up the steep mountain side to build the house.  Nelson’s father happened to live at the bottom of that mountain and watched Nelson work so hard, but never reach out to help.

When Nelson started preaching in the church, his father showed up one day.  What an incredible surprise and blessing.  Our prayer has been his father would come to Christ and restore the relationship.  What a thrill it was to get this picture of Nelson’s father at the Father’s Day service in church with Nelson’s arm around his father praying.  God always trumps wounds with his incredible love.